Why Visiting Maysville, Kentucky Should Be On Your US Bucket List 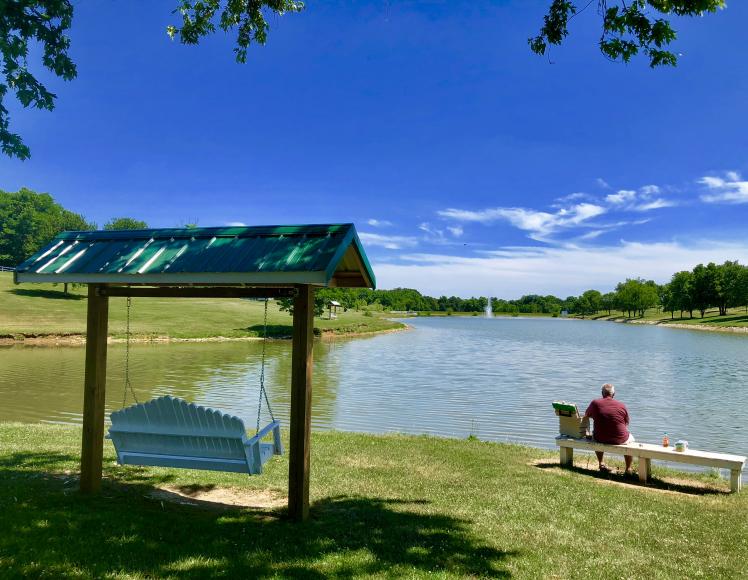 When you picture towns on the Ohio River, places like Cincinnati, Louisville, and Evansville probably come to mind. While these big cities have lots of charm of their own, sometimes you need to head to the smaller towns along the river to soak up the true character of the region. Introducing Maysville, Kentucky, an 8,000-person home rule-class city just an hour east of Cincinnati that’s a rich mix of Appalachia, Bluegrass, and good ol’ fashioned American history. Did you know that Maysville lies along the Lewis and Clark National Historic Trail? Now you do! Read why visiting Maysville, Kentucky should be on your US bucket list!

If you’re ever traveling along the Ohio River, Maysville is a must-stop for lovers of local culture, art, history, the outdoors, and more. Between stunning theaters and historic downtown districts, this unique river town has something for everyone to enjoy and love. Plus, it’s the birthplace of bourbon!

The backbone of Maysville’s vibrant art scene is the historic Washington Opera House, which is an official part of the National Park Service’s National Register of Historic Places. The opera house has been standing in its current form since 1889, but theater has been a huge part of the town’s culture since at least 1797. It’s been run by the Maysville Players since 1969, and is the fifth oldest theater in the national register that’s still in use today.

Downtown Maysville is populated with plenty of galleries, exhibits, and businesses that harbor a strong art community. When Simon and Laurie Watt, the owners of the downtown EAT Gallery, first visited Maysville, they called it a “gem of Americana” and just had to open up a business. Today, they sell jewelry, minerals, framed butterflies, and more in a historic building in the heart of downtown.

Other places like the Ohio River Valley Artists’ Guild, the Christie Toffan Boutique, and the Log Cabin Print Shop headline the city’s many art hubs.

Another must-see part of Maysville is the 10 murals on the town’s floodwall, aptly dubbed the Floodwall Mural Project. Artist Robert Dafford painted a series of murals between 1998 and 2008 that highlight the history and beauty of the area.

The Kentucky Gateway Museum Center is one of the main historic attractions in downtown Maysville, and is located just two blocks from the river. It features more than 4,000 artifacts, a fine art gallery, and plenty of exciting rotation exhibits. One of the most popular galleries is the Old Pogue Experience, which takes visitors through the history of bourbon in Mason County, Kentucky, and offers bourbon samples. The Old Pogue Distillery, located right near the birthplace of bourbon whiskey itself, dates back to the 1870s and was just the third distillery registered in the commonwealth.

Another keystone of Maysville’s history is its role in the underground railroad. Since Maysville was located just a short trip across the river away from the free state of Ohio, it played an integral role in supporting slaves on their journey up north. Harriet Beecher Stowe even recounted a slave auction in Washington, which is now a historic neighborhood of Maysville, in her abolitionist novel Uncle Tom’s Cabin.

Today, Maysville is home to the National Underground Railroad Museum, which is located in the historic Bierbower family home. The Bierbowers aided fugitive slaves, and their sons were even officers in the Union Army.

You’ll also be able to find two historic districts in Maysville that display that area’s rich culture and heritage. The Maysville Downtown Historic District was added to the National Register in 1982 and originally included 155 buildings, 87% of which were constructed prior to 1930, in the west part of town. The district expanded in 2017 and features gorgeous brick facades, parks, shops, and more.

Old Washington Historic District, which was annexed by Maysville, commemorates one of the first settlements in the Commonwealth of Kentucky. The town was originally incorporated in 1786 and named after George Washington. It had 462 inhabitants in 1790, making it slightly smaller than its big brother in the District of Columbia. Historic Old Washington is a must-visit if you’re in Maysville. Today, the quaint village features shops, festivals, museums, and more. It’s seeping with history and has buildings in the National Register at every turn.

Maysville was also visited by Lewis and Clark’s Corps of Discovery in September 1803.

Local food can truly make or break a trip, but luckily Maysville is chock-full of great options. One of the town’s hidden gems is M’s Eatery, which has a rotating menu and plenty of Kentucky hospitality to make you feel right at home. If you’re looking for something with views of the Ohio River, Caproni’s On The River is a great option and has been in business since the 1930s.

If you want something sweet, a cool pick is The College Bakery, which serves savory treats, baked goods, and coffee all hand-crafted by culinary students. Cafe Cream will fully satisfy your sweet tooth with its ice cream and even has coffee flights.

Take a walk down Maysville’s picturesque streets, and you’ll be sure to find something that suits your fancy.

After a long day of exploring all Maysville has to offer, you’ll probably want to stop for an ~adult~ beverage. Luckily, this Kentucky town has plenty of breweries, distilleries, pubs, and venues to keep you occupied. It is the birthplace of bourbon, after all! If you want to taste an original Kentucky bourbon recipe from one of the first-ever bourbon distilleries, Old Pogue is a must-see and must-sip. It’s been family-owned and operated since its inception in 1876. You can taste bourbon from all across the Commonwealth at Kenton Stories With Spirit, a classy spot to hang out in Maysville.

If you just want a spot where you can stop in and grab a pint, O’Rourke’s Pub and Crowe Bar offer great options in downtown Maysville, while Tater’s Tavern is a cool spot with custom cocktails in Old Washington.

Maysville is easy on the eyes and ripe for outdoor recreation thanks to its location within the rolling hills of northern Kentucky’s Outer Bluegrass region. A landmark of Maysville’s natural beauty is the Simon Kenton Memorial Bridge, which connects the town to its Ohio counterpart, Aberdeen. This 1,060-foot bridge was built in 1931 and is one of the last suspension bridges along the Ohio River that’s still standing today. The Maysville River Park Marina and Campground offers camping, picnic areas, boating, and more to soak in the Ohio River’s beauty right on its southern bank. There are 43 campsites available here, along with room for primitive camping.

The nearby Cummins Nature Preserve is just a few minutes outside of downtown Maysville and is home to 110 acres of hiking, wildlife observation, and nature education. If you want to stay the night, a few primitive camping sites are available at this preserve as well.

If golf is your thing, Maysville is home to Kenton Station, Laurel Oaks, and Wells Creek golf courses, as well as the historic Maysville Country Club, which was established in 1925.

Maysville’s beautiful landscape makes it a great place to bike, walk, or run, too. Nearly every spring, the Limestone Cycle League and Maysville Rotary Club put on the Limestone Cycling Tour. This scenic biking event features century, metric century, 40-mile, and 20-mile routes for cyclists of all skill levels. Different 5k and 10k running events pop up year-round as well. The Ford Acres Filthy 5k is next up in September.

Maysville has an exciting and wide-ranging calendar of events to keep things fresh every month of the year. You already know about the rotating exhibits at the Kentucky Gateway Museum Center, but different shows, festivals, fairs, and concerts visit this part of the Commonwealth all the time.

Just in June 2022 alone, you can catch the Maysville Uncorked Wine Festival, the Downtown Summer Sounds Concert, and Pickers & Grinners Summer Market. There’s a farmer’s market in Old Washington every Saturday year-round and from June through October 8th in downtown Maysville.

Like reading about what to do while visiting Maysville, Kentucky? Visit us at lewisandclark.travel to learn about other incredible destinations across the United States!