The Sacajawea Interpretive, Cultural and Educational Center was a project envisioned by Lemhi County residents, members of the Shoshone-Bannock Tribe and a diverse group of organizations including local, federal and state agency representatives. Creation of the Sacajawea Center coincided with celebrations leading up to the Lewis and Clark Expedition bicentennial. Funding  was federally appropriated from the Department of Housing and Urban Development and administered by the Governor’s Lewis and Clark Bicentennial Committee, now the Governor’s Lewis and Clark Trail Committee.

In 2001, seventy-one acres of land was purchased by the City of Salmon for the creation of the Center and in 2003, the park was opened to the public. In 2010 the Learning Center was completed, creating a space for community events and classes and giving the Center the ability to expand its season. The Center celebrates the birthplace of Sacajawea and the role Lemhi County and its people played in our nation’s history. The Center continues to honor the historic significance of the time spent by the Corps of Discovery in Lemhi County, the landscape its members explored here, the plants and animals they collected and noted in the journals and the cultures they encountered – in particular the Agaidika Shoshone people.

The Center hopes to continue to honor the many contributions the Agaidika Shoshone-Bannock have made and continue to make and the important role they have in human history. The land the Sacajawea Center home sits on are the traditional homelands of the Agaidika Shoshone-Bannock Tribes from which many were forcibly removed in 1907 by the United States government. Throughout past summer seasons, the Center has offered interpretive talks, youth programs, ancestral living skills classes, interactive interpretive exhibits, kids summer camps, and community events. The facility is also rented and used by other local organizations for meetings, memorials, fund raisers, weddings and classes. The site includes a large outdoor amphitheater, a dog park, a community garden, walking trails and public restrooms. The Learning Center holds offices, a large meeting space, a rustic 75 seat theater and access to the Lemhi River. The governing board of the Sacajawea Center is the Salmon City Council.

Each year, the Center celebrates the continued presence of the Agaidika Shoshone-Bannock Tribes at the  annual Agaidika Gathering which often takes place the third week of August. The public is invited to join the Shoshone-Bannock Tribes as they honor their homeland and ancestors with a spiritual walk/run along Agency Creek in the morning followed by singing, drumming and dancing in the afternoon at the Sacajawea Center. 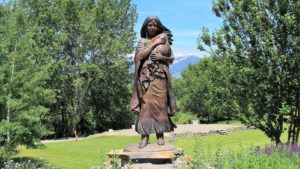 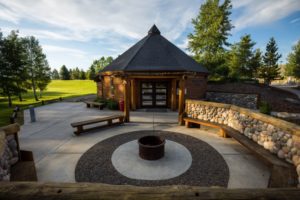 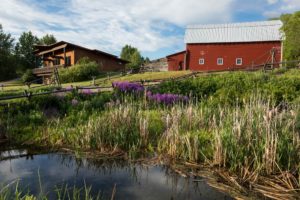 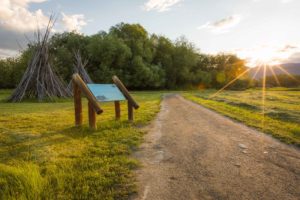 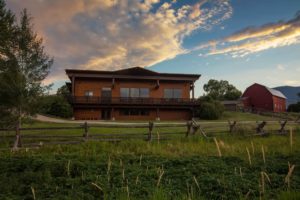