Step back in time with a visit to Fort Randolph, a modern day reproduction of an American colonial-era fort!

In 1776, Captain Matthew Arbuckle marched a Virginia force to the confluence of the Great Kanawha and Ohio Rivers. Under orders from General Edward Hand, Arbuckle erected a large stockade with block-houses and cabins that would become known as Fort Randolph.

Although only briefly in existence as an early American fort outpost, Fort Randolph played a key role in preventing an Indian alliance with the British during the early days of the American Revolution. It was also here, at Fort Randolph in November of 1777, that Chief Cornstalk of the Shawnee tribe, was murdered along with his son Elinipsico, and some other Shawnees by an angry mob. A few months later over 200 Shawnee, Wyandotte and Mingo warriors attacked and laid siege to Fort Randolph in retaliation for Chief Cornstalk’s death. The siege failed, but the fort was abandoned soon after. A replica of Fort Randolph now stands approximately a mile from the fort’s original location in Point Pleasant, West Virginia. Built as a commemorative project partially funded by the American Revolution Bicentennial Administration in 1974, this structure, like the original, features a complete stockade with multiple buildings.

Modern day visitors can watch history come to life at a variety of special events held throughout the year featuring costumed interpreters and reenactors that celebrate local and national American heritage! In addition to these events, on weekends throughout the summer months, visitors may casually enjoy the fort grounds through self-guided at their own pace or interpretive tours. We hope to see you on your visit here! 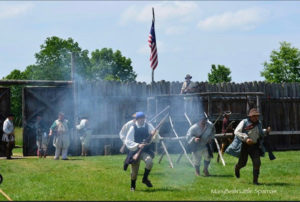