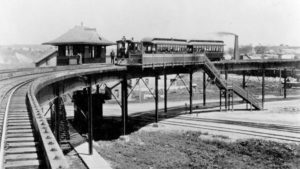 The city of Le Mars is located in the Floyd River in Plymouth County, Iowa. With a population of 10,571, it is the estimated 38th largest city in the state. It was in 1869 that the city was officially founded with the Sioux City and St. Paul Railroad Company purchasing. The name Le Mars comes from the acronym for the names of seven women that accompanied railroad builders who purchased the land, John I. Blair. While its origins lie in the Sioux City and St. Paul Railroad, modern day Le Mars is known by a more unique and grand title: The Ice Cream Capital of the World.

How did Le Mars become the Ice Cream Capital of the World?

The city of Le Mars became synonymous with ice cream when Fred H. Wells and his sons Harold, Mike, Roy, and Fay opened an ice cream manufacturing plant in the city in 1925. After selling their first plant in 1928, Wells and his family sought to get back into the ice cream business in 1935. Having sold their name, a contest was held to decide the name of their new ice cream company, with the winning name being Blue Bunny. The company remained primarily local until the 1980s and 90s, where the company, then in the hands of Fred’s sons and Wells’ Dairy Inc., began to see significant growth. The brand expanded nationally, and has continued to expand to this day, with their frozen deserts now a main staple of American freezers.

It was in 1994 with the help of Wells’ Dairy that Le Mars gained its title of Ice Cream Capital of the World, having the most ice cream produced by one manufacturer in one location globally. To celebrate the title, Wells’ Dairy enlisted local artists and sculptors to create 55 ice cream sculptures, which you can find today scattered throughout Le Mars. The ice cream plant that started it all still stands today, producing an estimated 150 million gallons of frozen treats annually. While it is not possible to tour the ice cream plant, there are still plenty of ways for you to experience great ice cream and more in Le Mars.

An ice cream parlor unlike any other, the Wells Visitor Center combines delicious ice cream with a history lesson on the Wells family and their ice cream journey. The parlor touts dozens of flavors of ice cream, sherbets, sorbets, and a number of other frozen treats. Just above the ice cream counter is an interactive museum that details how the ice cream is made and transported to the center. Along with the interactive exhibit, the center holds a theater which shows a film about the history of Blue Bunny company. The walls are covered with old Blue Bunny signage and old pictures from the Wells Ice Cream Plant, which sources the center with ice cream and is only a few miles away. The Wells Ice Cream Center is a must visit in Le Mars, showing that the title of Ice Cream Capital of the World is well deserved.

While the city of Le Mars is best known for ice cream, the city has a lot more to offer. Here are some of the best restaurants and experiences to make your visit a truly special one.

For a high quality steak in Le Mars, Archie’s Waeside is the place to go. The restaurant offers top of the line dry aged steaks along with seafood, a wine menu with over fifty options and a number of other dishes and beverages, ensuring that  there’s something for everyone. For steak lovers or for anyone looking for a great sit down dining experience, Archie’s Waeside is the way to go.

From sandwiches to sausages, the Iowa Barbecue Company is a dining destination all will love. Along with all kinds of barbecued meats like chicken and brisket, the restaurant has amazing made in house sides, like macaroni and cheese, cornbread, and others that make a barbecue complete. The Iowa Barbecue company gives tastes of the region all in one place.

Displaying the old school exterior it’s had since it was built in 1949, Bob’s Drive Inn is a Le Mars staple that should be at the top of anyone’s list. Now on the third generation of its family ownership, the restaurant has all the charm you could ask for in a local business.Bob’s Drive Inn has all the staples of a classic diner, serving sandwiches, salads, and even hand made shakes and malts. At a very reasonable price, Bob’s Drive Inn is the perfect place for a quick and easy meal in Le Mars.

The self-titled “Five Best Days of Summer”, the Plymouth County Fair is filled with festivities. In the last days of July, you can enjoy a talent show, a pioneer village, motocross, and so much more. It’s only around a few days a year, so make sure you visit while it’s there.

For any regular golfer, regular or beginner, the Willow Creek golf course is ready for your play. There are three nine-hole courses in total, each varying in difficulty meaning that you can enjoy the course regardless of your skill or experience.

Visit Le Mars, Iowa: the Ice Cream Capital of the World and Much More

With a title like “Ice Cream Capital of the World”, Le Mars is sure to draw your attention, but it’s what you find that’ll make you stay. A small city spirit with a rich history, a visit to Le Mars is a trip worth taking while traveling the Lewis and Clark National Historic Trail.