10 Breweries in Pittsburgh with Pints Worth the Stop 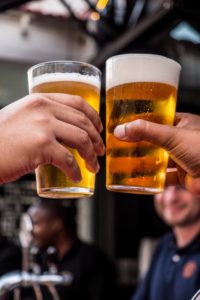 Are there any good breweries in Pittsburgh?

When you’re traveling on the Lewis and Clark Trail, you probably aren’t expecting to find some good IPAs. However, the trail starts right at a hot-spot for brewing, Pennsylvania. Pennsylvania has always had a strong brewing culture, with America’s oldest brewer, D.G. Yuengling and Son, operating from Pottsville since 1829. Since then, the craft has only grown in the state, with it having the second-most breweries in the US in 2021. This has led to a wide variety of breweries operating, especially in Pittsburgh. If you’re a connoisseur of the beverage and got a week to burn, these 10 Pittsburgh breweries should be at the top of your list. 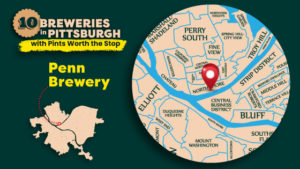 We’ll start our top 10 Pittsburgh breweries list strong with Penn Brewery. Penn Brewery has roots that go back to 1848, when German brewers from the Ober and Eberhardt families migrated to Pittsburgh. Penn Brewery officially started business in 1986, and has only grown since then. The Penn Brewery Complex is on the National Register of Historic Places, where three buildings from the Ober and Eberhardt stand. They added a restaurant in 1989, serving foods such as wurst, pierogi, and a wide variety of Pittsburgh favorites. With a rich quantity of IPAs to drown it down with, it’s no wonder why the business has seen such success. The website to Penn Brewery is here. 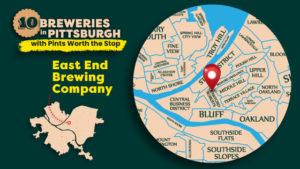 Since 2004, East End Brewing Company has been producing crisp beers,ciders, sodas. In 2021, they would add on to this package by adding a kitchen where they make thick-crusted, Sicilian style pizza. Their flagship beer, “The Big Hop”, is a malty beer that can only be enjoyed in person. A unique project East End began in 2019 that is still ongoing is the “You Are Here” beers. In this project, East End produces a beer for each of the ninety neighborhoods of Pittsburgh. This alone makes East End worthy of your time. 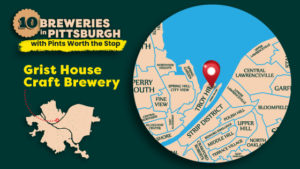 The Grist House is a community project, with the founders drawing assistance from their friends and family to make their dream a reality. That dream has come true, with Grist’s products being sold in retail and winning the award for best barrel aged stout in America in 2018. The brewery is also an official Penn State affiliate, with Lion alumni always coming for their games. Their drink menu is constantly expanding, with new beers, ales, and sours getting made like hot cakes. New customers should go straight for “the Hopadelic”, a fantastic starting beer. This combined with the brewery’s partnership with local food trucks and dog friendly policy makes Grist a great place to have a great time. 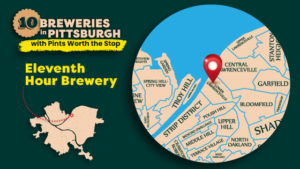 Eleventh Hour Brewery is quite the sight, with its exquisite design making it very inviting. The beers are also a big draw, having twenty-four regular options, along with monthly, yearly, and premium choices. The brewery has happy hour specials for those trying to save a dollar, along with a rotation of food trucks serving quality dishes. Another great feature of the pub is its accessibility, having bus and bike access. The brewery is located in the Lawrenceville district, so when you’re done enjoying their beer, make sure to take a nice stroll along the nearby Lawrence Trail. 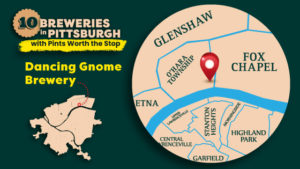 Coming in at 5 in our top 10 Pittsburgh breweries is Dancing Gnome. The Dancing Gnome has its name for a reason, as it has options consisting of wines, IPAs, ales, and more. Starting business in 2016, their operations grew from a plumbing showroom to a space that can hold 35 people. Located on the outskirts of Pittsburgh, this brewery offers a welcoming environment alongside an always changing food truck rotation. When you go by there, make sure to oder the name sake “Lustra”! 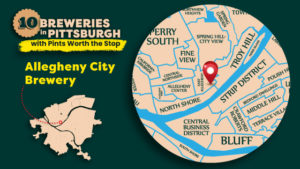 The story of how Allegheny City got started is quite an interesting one. Three Pittsburghers named Al, Matt, and Amy, moved to the Rocky Mountains of Colorado in the late 2000s. During that time, the trio would get deep into brewing, even making their own personal brews. They moved back to Pittsburgh in 2013 and have been open for business since 2016. They have twelve choices of beers to choose from, with options for any taste. ABC partners with local food trucks so that there is always a place to grab a snack. They also have a beer garden that can seat up to seventy-five people. This, along with a wall covered with an ever expanding picture wall of patron’s dogs, makes Allegheny City Brewing a key stop. 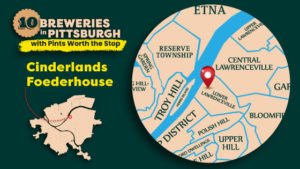 Cinderlands Foederhouse derives its name for the city, being the land of cinder.  The Lawerenceville brewery specializes in producing foederbier while also producing IPAs, lagers, ales, and sours. However, this is not all they offer, as they also serve Pennslyvania spirits, wines, and ciders! Their flagship and most popular beers are the hazy ale known as “Squish” and the “Tracks Again” pilsner. The restaurant in the brewery is a fine dining experience emphasing on Belgian style cuisine and a rustic farmhouse style atmosphere best suited for a cozy night out. The Foederhouse has monthly beer pairing dinners, Foederbier tastings and trivia on Sundays. All these elements combine to make Cinderlands Foederhouse brewery that has to be experienced first hand to fully appreciated. 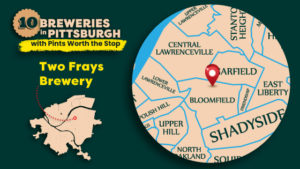 Two Frays Brewery gets its name from its two owners, Jen and Mike. The couple met over a beer and have used their experience with brewing over the last seven years to launch their business. They would open up their brewery in 2020, with the goal of bringing quality beer to the Steel City. They have a powerful seven-barrel and four-fermenter system that is capable of creating these beer. They have a wealth of options to drink. The brewery offers a rotation of food trucks and often does collaborations with other businesses. The small business is also dog-friendly, is developing plans for tours of the brewery, and even offers service to Korean speakers. If you’re looking for a place that is warm and welcoming, this is the place for you. 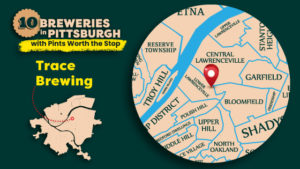 Trace Brewing is a young brewery, opening business during the COVID-19 pandemic. They took the challenge in stride, with business growing daily. Dave Kushner, the owner of Trace and Massachusetts’ Remnant Brewing, moved to Pittsburgh to open the brewery. The building they work out of used to be a brass foundry, giving an unique interior design.The exterior is unique as well, with the outside of the building having a wall where spray painters can paint freely. The staff favorite drink is “the Keller”, a smooth pale lager. The brewery always have something going on, from music, food trucks, weddings, and drag shows. Their tap options are always changing, so freshness is not a problem. They also have a coffee and pastry shop inside. If you’re looking for a youthful and lively spot, Trace is the place to go. 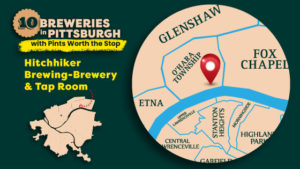 Last but not least, one of our top 10 breweries in Pittsburgh is Hitchhiker Brewing. Hitchhiker Brewing is a fifteen-barrel brewhouse that opened in the Sharpsburg district in 2014. Their facilities work out of an old brewery boiler house of Fort Pitt. Their drink options are ridiculous, having a hundred IPAs alone to choose from! For food options, they usually have a rotation of different food trucks that cycle through the week. For seating, they have seating options for those who want to stay indoors or those seeking fresh air. While they have a no dog policy, they do offer happy hour specials,live entertainment, and free parking, so be sure to give this pub a look before you leave Pittsburgh. 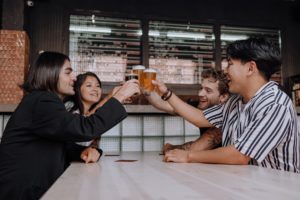 And there you have the top 10 breweries in Pittsburgh, but there’s even more waiting to be discovered. You can find all these places soon on the interactive map on our website. So when the Lewis and Clark Trail eventually leads you to the 412, be sure to give ‘em a shot! Send pics of yourself enjoying some of these brews to our Instagram and Facebook pages. Don’t forget to follow us while you’re there!