When a shipment of new Lewis and Clark Auto Tour signs showed up in Jim Mallory’s office last summer, the vice-chairman of the Lewis and Clark Trust stopped everything he was doing to deliver them to communities along the Ohio River. When the Lewis and Clark National Historic Trail expanded eastward in 2019, this new 1,200-mile stretch of land — which is home to nearly 10% of all Americans — suddenly needed a new officially designated auto route. Mallory received 36 signs and quickly got to work distributing them in Kentucky, Ohio, and Indiana, sharing tenants of tourism and the original Lewis and Clark mission along the way.

“The message [to the communities] was simply this: We deliver you a free sign for the Lewis and Clark National Historic Trail,” Mallory said. “They have approved these designated routes in this letter that’s in your package here…that message really went well.”

The instructions that came along with the signs were simple, but communities all along the trail were responsive and excited to officially add themselves to the historic trail’s auto route. 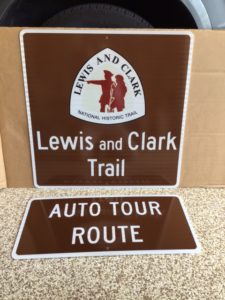 Folks in the state of Kentucky, which received a batch of 26 signs in the first shipment, were particularly impressed by the simple, no-strings-attached approach to the auto route. One county judge in the Bluegrass State said it was “phenomenal” how easy getting the sign up was, especially compared to working with other agencies.

Counties and communities could place the signs wherever they wanted along the designated highways, which gives local leaders with the best knowledge of their areas an opportunity to optimize the auto route for tourism. This is extra important in a new, post-COVID-19 form of tourism that Mallory calls a “traveling public.”

“Your tourist today is mine tomorrow,” Mallory said. “The big picture of tourism is that people are really going to need to share information from one county to the other.”

This is especially true along the Ohio River, where travelers and tourists need to pass through a myriad of different towns and communities when crossing bridges and traveling along the water.

With a recent uptick in travel and cross-town collaboration comes an uptick in interest from community leaders in focusing on tourism. During Mallory’s visits to towns, important folks like city councilmen and mayors would sit in on their meetings, which were always scheduled for just one hour but often went much longer.

One of the more exciting ways Mallory and the Lewis and Clark team are sparking interest in tourism is through the Junior Ranger book, which has been printed and distributed more than 300,000 times to date. With what mallory calls an “aging” American population, getting younger generations interested in volunteering, history, responsibility, and preservation.

The expansion of the auto tour route makes it easier than ever for this “aging population” to explore the Lewis and Clark National Historic Trail.

Grandparents might not be able to hike the entire Pacific Crest Trail or scale El Capitan, but maybe they can drive along the original path of Lewis and Clark and teach their grandkids something along the way.

“We have only begun to scratch the surface of what these historic trails can do for the American people,” Mallory said. “You can get in your car and drive a segment of [the trail], get out and walk every hour, and visit a historic site.” 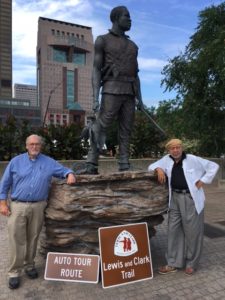 Mallory hopes the younger generations pick up on the values of the Lewis and Clark mission along the way: perseverance, a shared responsibility, and pride and accomplishment.

This “shared responsibility” is important to the future of trails, parks, and protected areas all across the United States, mostly through volunteer work.

Volunteers are the lifeblood of the National Parks Service and other related conservation agencies. The people who are the most passionate and interested in their respective trails and parks, who are often just volunteers, will usually be the most helpful.

Mallory can recall countless times volunteers or employees at tourism offices have solved problems for him that have been taking government officials months. They know their communities well and want to see things get done, especially when it came to putting up the Lewis and Clark Auto Tour Route signs

“[Volunteers] had a better grasp of reaching out to the DOT people responsible for putting these signs up than I did,” Mallory said. “They knew who to contact because they go to church with them, they’re in PTA with them, they play golf with them.”

But, for volunteers, it’s often a two-way street. They help maintain trails, set up signs, and promote tourism, and in turn get much-needed help for their small businesses or shops.

In the case of the Lewis and Clark National Historic Trail, LewisandClark.travel has allowed countless folks along the trail to share their story and promote their businesses — with more than 2,000 partners to date.

The trail and LewisandClark.travel are creating a cycle of volunteer work, preservation, tourism, education, and then back to creating new volunteers. And in the end, it all goes back to protecting the land, communities, and native tribes along the original path of Lewis and Clark.

“These trails benefit early settlers that came to this country: tribal people, African Americans — it tells the full story of the total ethnicity of the world,” Mallory said. “And that’s one reason we need to really make sure volunteers promote this thing.”